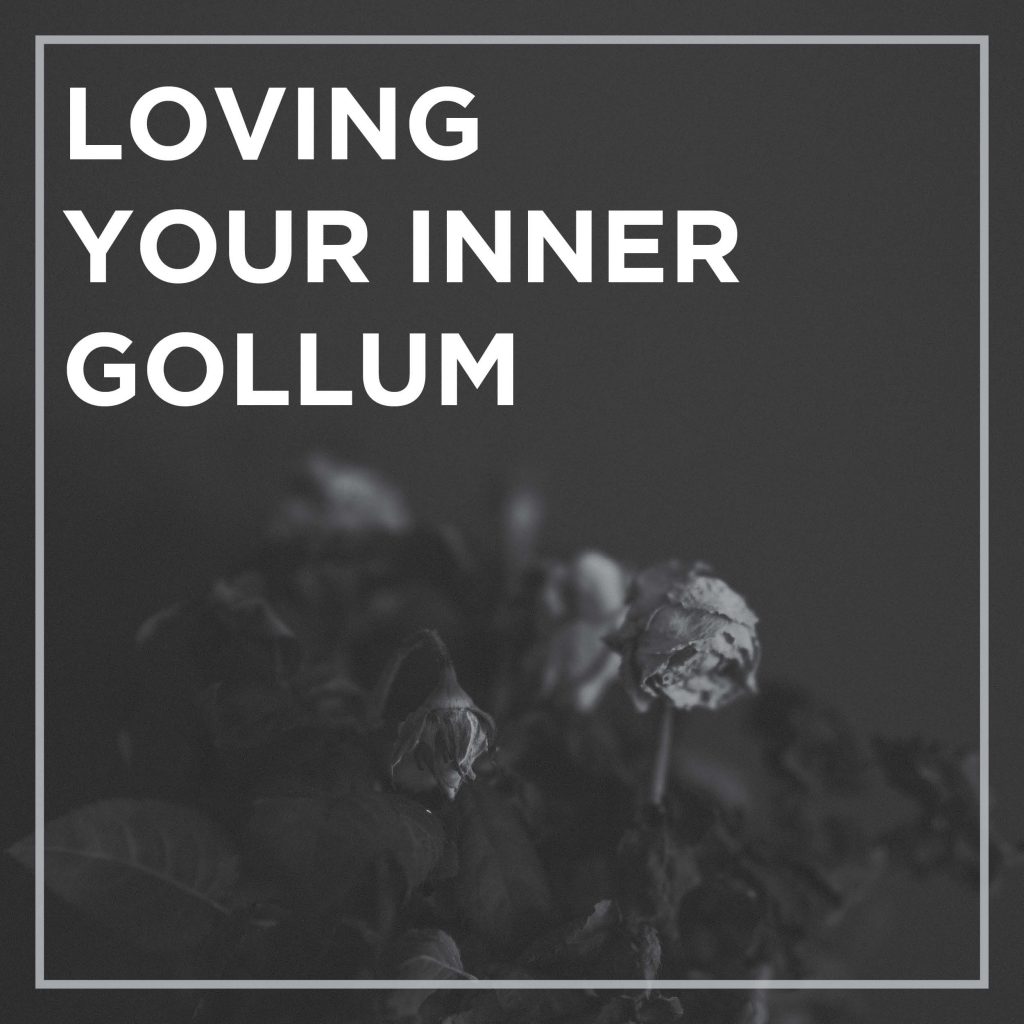 I’m currently reading the Lord of the Rings for the third time; 12 years have passed since I last read them and I am picking up more of the rich nuances in the novels than ever before. The whole story is an allegory for the struggle of life, the battle against sin, and Providence at work through it all. There are many rich characters in the story, but the most intriguing and contradictory one is the treacherous Gollum. He is conniving, manipulative, dirty, slimy and solely fixated on his “Precious” (The One Ring). Because the Ring is an embodiment of sin, Gollum, therefore, reveals the true effects of sin: he is isolated, obsessed, fractured, and less-than-human.

Gollum and Frodo stand in contrast to one another. The villain and the hero. Gollum is the character who is almost beyond redemption, so twisted in his own evil and lust for the Ring that his personality has literally been fractured into two: the naive child and the sociopathic killer. Frodo takes the Ring not for lust, but for charity. He feels and knows its power but resists its seduction for a greater good: to destroy it. One of the many marvels of this story is that Frodo empathizes with Gollum’s plight, unlike many of the other characters in the story. Everyone wants Gollum dead, but Frodo is moved with pity for him. Frodo clearly understands the power of the Ring and knows that it would not take much to end up like Gollum. That is empathy. Mercy is loving that which does not deserve it.

We all desire to be the hero, but the truth is that there is an inner villain inside of us all (as Jordan Peterson likes to remind us). Gollum embodies that inner demon; that part inside of us that we hate about ourselves. The vice that we fear. The thorn in the flesh. The sin we regret. All of that is Gollum. It is the part of us that we would kill if we could. We ask ourselves, “Why won’t it just go away?” “Why does it keep showing up and ruining things?” We try hard to ignore it, forget that it is there, or stuff it deep down.

I think it is safe to say that most of us struggle with being our own worst critic. We continually condemn ourselves for not being enough. Yet, I think Tolkien is inviting us to consider another option. Rather than constantly trying to kill those things in our lives that we identify as Gollums, we should begin to see them for what they are: a lost part within us that needs saving. Rather than meeting our anxiety with contempt, greet it with love and affection. The way of redeeming that villain within is not through condemnation but through mercy and clemency. Self-Compassion, as Kristin Neff calls it, would be the answer.

We often reject our weakness because we do not understand it. Therefore, let’s turn our attention to Paul’s Second Letter to the Corinthians.  St. Paul proudly proclaims that “If I must boast, I will boast of the things that show my weakness.” (2 Cor 11:30). Huh? What? This is the missing piece and why it is important to not be ignorant nor condemning of your struggles. Paul boasts of his weakness, because our Lord tells him, “My grace is sufficient for you, for power is made perfect in weakness.” (2 Cor 12:9). It is in those moments of weakness that we encounter our human limitations; ergo our need for salvation. We run from those struggles because we fail to see how God can use them for his Greater Glory. But the mystery of the Cross is that in our poverty we are most likely to encounter Jesus. Paul understands this, which is why he can see the purpose behind the “thorn in the flesh” (2 Cor 12:7). It is given to him to keep him humble and prevent him from developing pride. See it this way: God loves Paul enough that he didn’t want him to be an egomaniac because of his great preaching skills. That elusive thorn is the vehicle used God to make that happen. The thorn in the side is God’s mercy. That’s Providence at work in the mystery of sin.

Paul’s thorn was his own issue that he needed to understand, but we all have thorns and struggles that we are trying to make sense of in our lives. We have no idea how everything will play out. Frodo didn’t. He had no idea what mercy towards Gollum would do. In the end, it becomes the thing that saves Middle Earth. Yes, we absolutely should have a clear aversion to the sin in our lives and sincere desire to be free from it, but I reiterate my point… harsh criticism is not the answer. It only makes matters worse. Rest in your neediness and trust in God’s love to meet you there.

Learn to love your inner Gollum, because God does, and one day you will see why he was there the whole time.

A year after my conversion, which happened on a retreat during my freshman year of college, I had to come to terms with the media

“Like we saw Jesus stripped of everything. And in clinging to His cross, we saw the most beautiful resurrection. And we saw life.”

“Or would I want to feel that feeling that Mary gave us? And that Mother Teresa gives. Wow! Look at you. You’re amazing, you radiate,

My first question from the “Ask Dr. Mario” tab! I put that up so I can field questions from the growing community of listeners of